“I am a human being before I am a sex worker”

Welcome to the Johannesburg CBD where money is what sustains many livelihoods and the nature of sex work is both implied and explicit. For many, sex work might be regarded as a morally degrading activity in society but for some of the men and women involved in this business trade, agency is what regulates their services.

“I became a sex worker because I wanted a Carvela for my matric dance but could not afford it,” says 28-year-old Lindiwe who is still an active sex worker. Lindiwe says she had always dreamt of owning the pair of shoes and a friend of hers recommended sex work. The young woman laughs as she explains how she gave into peer pressure, thinking that would be her last time working as a sex worker.

“I had plans of continuing with my studies but I managed to buy myself shoes and once I was in the field, I met successful women and some of them were mothers who were earning a living through sex and I decided to stay,” she says.

Lindiwe is one of many men and women who are fighting for the decriminalisation of sex work in South Africa as they believe that their work is just like any other occupation. She says in as much as she would appreciate the freedom of movement, it’s the police harassment and the stigma in society that she wants to see gone.

“The police will take me from just standing at a corner and not tell me why they are arresting me. It’s tough because others don’t want bribes but ask for sexual favours and if we refuse then we are kept in cells or wrong statements are handed in,” she says.

Lindiwe says she’s spent nights in holding cells three times during her career, and while she has gotten used to being taken by cops, no two days are the same. “I just pay the bribe sometimes because I can’t be losing business,” she adds.

Sisonke Media Liaison Officer Katlego Rasebitse says sex workers want to be law-abiding citizens, but the laws in the country make it difficult for them.

“Some of our members are part of brothels but have seen underage children being used as sex workers. We know this is not right but are afraid to report now because when we do, the police end up harassing everyone,” says Rasebitse.

“We also have a strict policy of advocating for safe sex because we know that HIV/Aids is a serious thing. All we want is to be allowed to do our work because we are not criminals,” he says.

Lindiwe says sex work is her choice of work and she wishes that people would respect this choice and not pity her. Another sex worker, a friend of hers, shouts, “We are not a charity case, we can drive our own cars and build our own homes with the money we make, so I wish they would leave us alone because we are not prostitutes.”

The two laugh and Lindiwe justifies why she doesn’t like being called a <em>magosha,</em> “I work according to a structure and rates like any other person who renders services. Prostitutes settle for anything given in exchange for sex because they are desperate.”

Lindiwe says she is married and her husband is a former regular client. Her small eyes get bigger as she beams over how he approached the marriage subject. “He obviously had been watching me for a while and he asked if I would leave my job if he married me and provided for me,” says Lindiwe, who then takes a speech pause.

“This was a serious proposal but I said no!” chuckles the sex worker whilst rocking on her chair. Her friend says, “But here you are married to him right now, isn’t it?” Lindiwe answers confidently saying, “Of course! He found me making my own money and he just had to understand that I love what I do, and it’s just work.”

Lindiwe says it’s life changing situations such as these that prove just how much she loves her job. “If something better came along then maybe I would take it because growth is an important thing but for now, I’m happy.” she says.

She says society will never understand the many roles that sex workers are forced to play. “I end up being a friend and counsellor because most of these men are depressed,” she says. 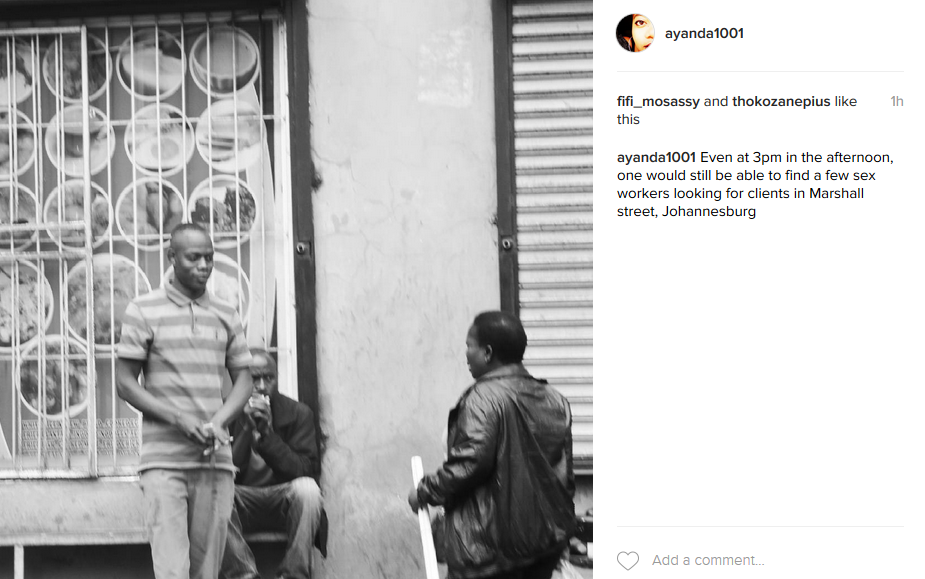 “We have regular clients that we have formed friendships with, and we’ll often refer them to marriage counsellors because we are also tired of seeing single mothers. Their wives must also understand that we are all sexual beings and this thing of having sex once a month doesn’t work,” says Lindiwe.

The story of sex work is the same but the people in the field are all different, says Primrose who is a 44-year-old mother of four children aged between 23 and 10 years old. Primrose was born and raised in Zimbabwe but moved to South Africa in 2007.

Primrose used to work as a housekeeper at a hotel in the area before deciding to get into sex work. “Getting a job was so easy for me when I got to South Africa and I also got free accommodation, so when I lost all of this, looking again was difficult.”

She says she had spent years working at the hotel and had failed to acquire new skills while she was there and, as a result, she thought she was not employable. “Luckily for me, I knew some women who worked at the hotel as sex workers and they all looked decent and respectable, so I didn’t see it as a bad thing to do,” she said.

Primrose says although the CBD is her ‘home’, she has learnt to move from one place to the other. “We call it seasonal movement because we know where the money is. Sometimes, I’ll go as far as Witbank during the week then come back again on weekends.”

The flamboyant mother boasts about her rights as a sex worker, saying she is more than just a sex worker now as she is a peer educator to other workers. “We teach them how to practice safe sex and also how to express that they are sex workers when they get to spaces such as clinics.”

Primrose says most of the sex workers she knows have been harassed by nurses in clinics. “They will tell me to bring my partner when I had just told them I am a sex worker. It doesn’t make sense, but I now know how to deal with them,” she says.

Mpho Ramashala who is a counsellor that has worked with some sex workers at the Hillbrow Clinic says that she sees many types of workers but their frustration as health caregivers comes when some workers are not honest about what they do.

“Talking to them tends to be difficult because they are not always honest, and with treatments such as PrEP, we find that oftentimes, it is not given to the right people,” says Ramashala.

Pre-Exposure Prophylaxis (PrEP) is medication given to people who think they might be at high risk of getting the HIV/Aids virus. Ramashala says different people use it differently but she’s aware that some sex workers use it because of the high risk they face. 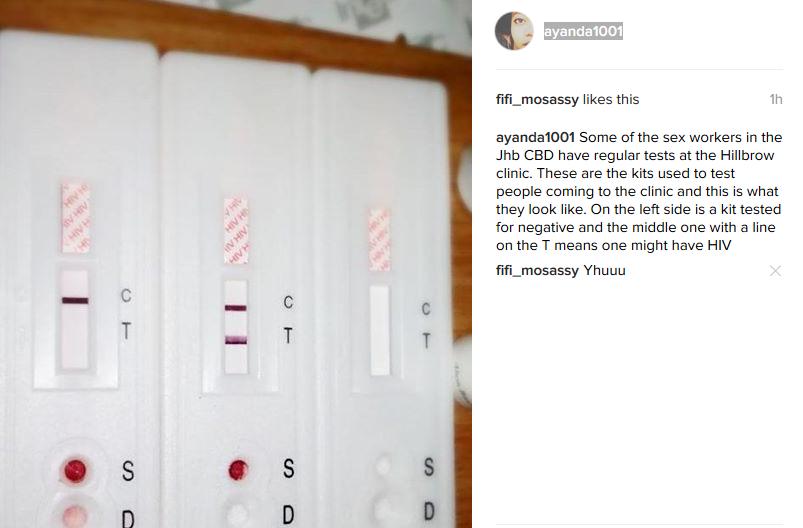 Primrose says part of her job is to make sure that sex workers understand these medical processes and join focus groups which help many workers feel empowered. “I empower other women and I feel empowered because I have learnt how to write and tell stories through newsletters that we circulate,” says Primrose.

She says her biggest concern is always about taking care of herself. “I always avoid drinking too much alcohol because I need to look good,” says the woman whilst fixing the positioning of her hoop earrings, exposing her natural and unmanicured long nails.

She coils her legs on the grass as she’s seated and says “I always wanted to be an air hostess when I was a child, even my brother used to call me air hostess and I loved that name,” says Primrose.

This sentence is later followed by a consoling, “But I am in this industry because I want my children to be professionals one day. I want them to have the best education.” Primrose says her children think that she’s a peer educator that helps other women but don’t know that she too, is a sex worker.

The fact that her children link her to only one profession does not bother her. She says, “People think sex workers are dumb, immoral and dirty, but that’s not true. We are parents, we are also human beings and deserve respect.”

Primrose says she hopes that sex work is decriminalised because it would make things easier for them and also assist in having discussions around the work they do. The poised woman says she would love to be viewed as just Primrose who provides for her family and not a sex worker.

“We do normal things, I’m a domestic and like doing laundry and cleaning. I’d rather not have anything in my fridge but stay in a clean environment,” she says before breaking into giggles. Primrose says sex workers all have their different mechanisms of dealing with things, and cleaning has always been hers.

“I will even chase my boyfriend away and not respond to emails until I am done and I think my house is clean,” she says. Just like Lindiwe, Primrose also met her boyfriend of seven years on the job. She says he has always been supportive of her decision to stay in the field of sex work.

Primrose says she has learnt to be content with her job but wishes that many of the younger girls in the field knew about the various projects that can earn them extra money on the side.

“If you are not leaning on something else then sex work can be so hard but it’s also funny how the men we do business with prefer independent women who do other things on the side,” she says.

When asked how much her rates are, Primrose jauntingly responds with “Look, I cannot respond to that but just know that it is enough for me and my extended family.”

Both Lindiwe and Primrose have coexisted with what are considered social ills and degrading activities in society but for them, there is nothing degrading about sex work as this remains their choice of occupation. “I am not my work and I am a human being before I am a sex worker,” says Primrose.